So this week threw me for a loop a little. Over the weekend we started limping. Front right leg, just a little “ouchie”, but no whining, and I didn’t see her do anything that necessarily said possible critical condition. Plus, despite the limp, she was bounding around like normal.

So to be safe. We hit the vet. Big words came. Panoestitis, Hypertrophic Osteodystrophy. What the whaaaat? Flashes went through my head – intense pain, those dog wheel things, therapy, thousands of dollars, everything. Then the vet said “Those mean: Growing Pains.” Swhew: Exhale. Why didn’t we lead with that!

That said, we went home and she’s on her anti-inflammatory meds and still limping a bit after not learning to “stop jumping and running with so much gusto” but she’s feeling better and that makes my heart happy. I’m seeing improvement and she will grow out of this – prognosis is excellent.

Meanwhile, on our first night of meds, I guess we had the inspiration to learn to FINALLY 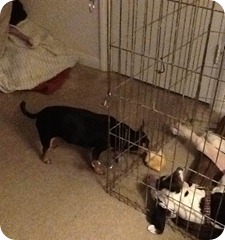 bark at Ralph. Exhibit A at right…I gave her the bone she chews on before going to sleep in her crate. Ralph immediately starts to chew on the bone THROUGH the crate bars. Penny = not a happy chick-dog.

All of a sudden, she turns head up and….well, I’ll let you watch the rest for yourselves. The canine conversation between these two (turn it up to hear the odd high pitched whiny noises) is hilarious. I’m glad she’s already feeling better enough to tell him that clearly, that rawhide is her business and her business only.

Meanwhile, back at the ranch. I was concerned about her growth. She’s slightly smaller than the growth charts want her to be, but then again, she was slightly smaller than the rest of her bunch anyway. (Translate: still a big puppy!) But any questions I had about her growth were calmed when the vet came in (only two weeks after surgery) and said “WHOA! Who grew!”…so I think, we’re still just getting giant-er.