Since I normally go on and on about my big ol’ doggie, I thought this week I would back up, since not too much developmentally is going on, and talk about the historical and cool facts about Great Danes.

Dogs looking similar to these beasts are represented on Egyptian monuments dating back to 3,000 BC.

They were originally developed in Germany to hunt Wild Board and were known as Boar Hounds, later to be known as English Dogges.  (Get along “lil” doggie?)

Great dane puppies can have growth spurts so noticeable that after ONE NIGHT’S SLEEP they have been noted as having increased size. 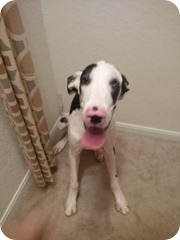 Good for me, Great danes are considered better pets for females due to their sensitivity towards aggressive and negative training methods.

To address one of my biggest questions from Penny fans: they don’t really eat THAT much. As an adult, Danes consume about the same food as a labrador retriever.

Your favorite cartoons are in fact Great Danes – Scooby Doo and Marmaduke are both modeled from Great Danes! Disney even released a 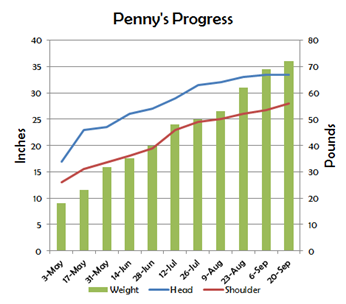 movie about them – The Ugly Dachshund!

That said, there was GROWTH as I went away on my trip. I mean, I know I left a big dog for the Big Apple, but it’s so trippy freaky happy good stuff to come home and go “WOW! Did you EAT!”…that said, our current progress tops us out at….